Big V (Vatovavy) on the morning walk in.

All was going well for team Varecia at Vatovavy. Lemurs were being followed and data meticulously collected. Until one day in late November when an old faithful Lemur, Manga Be (blue collar), appeared to have gone off radar. After many searches of his usual terrain around the lower foothills of Vatovavy, morale was beginning to hit an all time low.  What could have happened… predation? Untimely health issues? Or broken ATS collar?

After much deliberation and speculation, we were left with no alternative but to trek ‘ambony be’ (‘big uphill’ to the highest pass between the two mountains at this site, Vatovavy and Little Lahy) to search for any remote signal that could be found.

Exhausted after an hour’s intense ascent and with little hope of success we watched the guides with bated breath as they methodically scanned the airwaves for any trace of signal. Low and Behold the eyes of our faithful guide Edgar lit up as he announced the now familiar phrase Ambadka Lavitra Be! (Other side, big far!).

Followed by a cloud of Mosquitoes and dripping with sweat we began our intrepid journey into a place unknown, the other side of Vatovavy. After descending for about an hour we stumbled upon a new type of vegetation. This part of the forest was so dry that even the mosquitoes had absconded. Most of the trees were long dead, silver branches almost fossilized in appearance littered the under story. The only splash of greenery in this otherwise barren wasteland was provided by the dreaded ‘Razor grass’. As we discovered to our detriment, this inexplicably sharp plant will tear any clothing to shreds and lacerate bare skin, leaving an abundance of paper-cut like wounds.  Stopping to scan for any distant signs of signal, doubt started to creep into our minds as to whether Mange Be would choose to inhabit such a strange, arid environment.  Encouraged by the excitement of exploring the unknown we pressed on in the direction of the faint radio signals.

Stopping to scan for faint signs of signal

After a short while the vegetation once again changed into the luscious rainforest that we are so used to, reassuring our tentative hopes that we were on the right track.  Amazing granite rock formations that make Vatovay such a stunning mountain loomed into view between ancient trees and a low mist that had started to creep in.  Exploring this unknown forest instilled in us the feeling that we were treading on uncharted territory. This was until we came across a strange arrangement of logs and pieces of wood, haphazardly placed under a giant overhanging monolith of rock.  On closer inspection we could see tattered shreds of cloth emerging from these dark and eerie planks, when our guides informed us that it was in fact a tomb.  In fear of disturbing the dead and being labeled ‘disrespectful bone stealers’ (as can often happen to an innocent vazah in Madagascar) we hurried on our way.

Scrambling through dense and uneven jungle, our ears were awakened by the unmistakable call of a Varecia in the vicinity.  Having located our wayward Mange Be to much relief, our only remaining concern was to navigate the long way home. 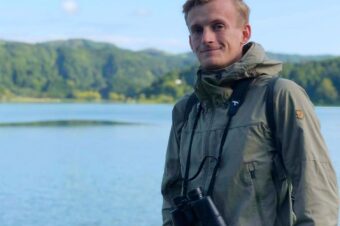 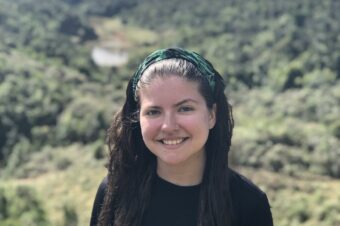