Kianjavato Ahmanson Field Station, also known as KAFS, is a central location for all research and community outreach projects in Kianjavato. Located in southeast Madagascar, Kianjavato is comprised of about a dozen villages and at least 12,000 people. The surrounding forest fragments are home to nine lemur species, including the elusive and nocturnal Aye-aye, and two critically endangered lemur species, the Black and white ruffed lemur and the Greater bamboo lemur, both of which are listed among the 25 most endangered primates in the world due to habitat loss and hunting.  Forests in the area are fragmented, unprotected and are being rapidly depleted, thus, there is a vital need for swift and effective conservation measures.

In 2008, the Madagascar Biodiversity Project (MBP) initiated a large-scale conservation program in Kianjavato that entails a grassroots reforestation effort, several lemur monitoring programs, and a community outreach initiative. Importantly, the MBP works in conjunction with area residents, numerous Malagasy organizations and governmental entities, as well as its international conservation and research partners. The station is anything but traditional, built from shipping containers and secured to a concrete foundation. The multipurpose building serves as a dorm, kitchen, office space, a research laboratory and a community education center. KAFS continues to see enormous developmental changes. The site is on its way to becoming sustainable through the use of solar panels for electricity, wells for drinking and using rocket stoves to cook. Also, in late 2015, a garden was constructed to produce our own fruit and vegetables.

The Greater bamboo lemur (Prolemur simus) found in the humid forests of eastern Madagascar is critically endangered. In fact, it ranks among the top 25 most endangered primates in the world; and at one point was even thought to be extinct. Its rediscovery in 1986 in Ranomafana was one of the leading factors in designating the area as a national park. It was also simultaneously rediscovered in the Kianjavato coffee plantation, an area that currently harbors the greatest concentration of the species. Once widely distributed across vast areas of the country, massive deforestation and hunting have resulted in dwindling numbers of greater bamboo lemurs. Due to this ongoing issue, a successful program was implemented by the MBP and Omaha’s Henry Doorly Zoo & Aquarium (OHDZA) in the villages of the Kianjavato commune. The program has brought a stop to the hunting and is rallying local support for the lemur’s conservation.

The MBP is conducting a comprehensive study on the population genetics of the greater bamboo lemur, which is keystone information in developing effective in situ conservation plans. For this project, non-invasive techniques are used, relying on fecal samples instead of tissue as the source of DNA. This means less stress on the lemurs, less expense, and the ability to make Malagasy residents contributing members of a research team with modest amounts of training. Through educational outreach, village meetings, and training local guides, a holistic approach to conserving Kianjavato’s local flora and fauna is developing. Encouraging communities to sustain themselves by conserving their resources rather than exploiting them will be a long-term process, but is the most effective way of steering Madagascar onto a healthier, more prosperous course.

Although well-known for centuries, the Aye-aye’s reclusive lifestyle has limited our understanding and knowledge of its ecology, demography, and population genetics in natural populations. This nocturnal lemur with unusual traits including an elongated, thin, highly-flexible middle finger, continuously-growing rodent-like teeth and the largest relative brain size of any lemur, typically leads a solitary life. Aye-ayes have the largest species range of any existing lemur. Three sites have been selected to represent aye-aye habitats across the geographic range of the species, the humid eastern forests (Kianjavato and Torotorofotsy) and the dry western forests (Anjiamangirana). Because of the demand on the forests they call home, aye-ayes may be especially vulnerable to extinction due to deforestation and hunting.

The MBP and OHDZA are working with local guides to follow these elusive primates. Using radio collars placed on individual aye-ayes, we are collecting data on demography, habitat use and food resources. 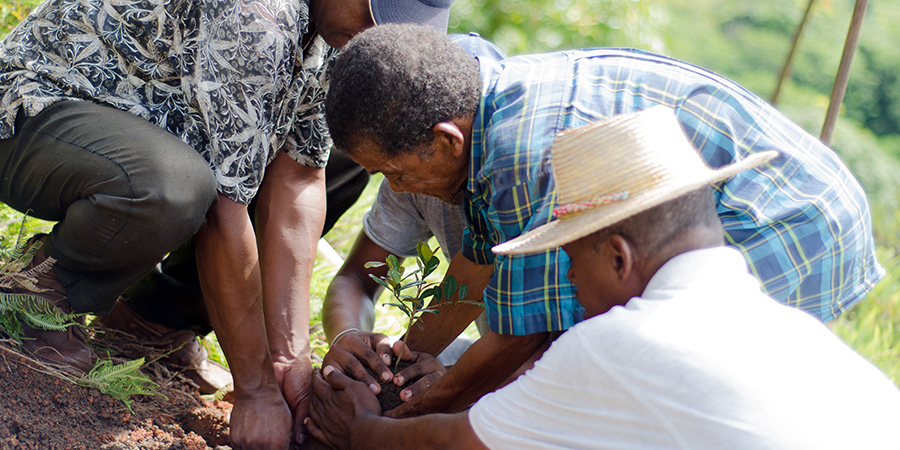 The “Education Promoting Reforestation Program” (EPRP) focuses on the diet of the critically endangered Black and white ruffed lemur, which eats fruit whole and then passes the seeds unharmed. MBP and OHDZA discovered that seeds collected from poop grow better than “unprocessed” seeds. In this unique reforestation project, seeds are used from the lemur feces to rebuild a lemur-friendly forest. Together we are not only planting the lemurs’ favorite seeds, but also timber and fruiting trees closer to the villages to provide additional food and income.

Under the EPRP, MBP and OHDZA personnel and graduate students track the lemurs through the forest, collect their poop, and plant the seeds in nurseries. The seedlings are transplanted as part of a community-supported reforestation program in an effort to restore Kianjavato’s damaged forests. More than 1000 people in Kianjavato Commune (a commune includes multiple villages) have participated in weekly planting events.

Utilizing this field-tested methodology, OHDZA, MBP and Conservation Fusion, Inc. (an international educational NGO) are initiating EPRP’s in additional regions of Madagascar from the arid south to the seasonally dry far north with the help of other seed-dispersing lemurs and eager community participants. This work is coupled with intense community education and outreach efforts that integrate alternative agricultural practices, resource conservation and entrepreneurial opportunities.

“SOS – Save Our Species is a joint initiative of IUCN, the Global Environment Facility and the World Bank and supported by other donors. Its objective is to ensure the long-term survival of threatened species and their habitats.”

In 2012, the MBP and OHDZA initiated a Conservation Credit Rewards (CCR) program to encourage participation at community planting events. This program rewards local Malagasy schools, families and individuals who participate in tree-planting day events with a variety of items. Incentive items were selected for their potential to improve the standard of living while reducing people’s burden on local forests. This program strives to balance community-identified needs with that of local critically endangered wildlife. For every tree planted by a participant, the MBP gives them credit to be accumulated to earn sustainable, green, life-changing tools like solar kits, rocket stoves, bicycles, sewing machines and Hippo Rollers. By having Conservation Credit participants earn and save their credits to “purchase” an item listed in the Conservation Credit catalog, the local community members are learning to save for their future, while still bringing home money to support their families.

In 2014, Dr. Louis and his team, along with the help from UNO graduate student, Greg Pagett, introduced scan-able, photo IDs and an accompanying computer program to keep track of every credit earned by each participant and every tree planted.

As of July 2016, over 1,776 people have enrolled in the program, with new participants added monthly!